In this project, we used Kaggle dataset of Fake news and downloaded real news from Guardian website. Most existing works have used supervised learning but given importance to the words used in the dataset. The approach may work well when the dataset is huge and covers a wide domain. Additionally, the algorithms are trained after the news has already been disseminated. In contrast, this research gives importance to content-based prediction based on language statistical features. A pattern in the language features can predict whether the news is fake or not. We extracted 43 features that include Parts of Speech and Sentiment Analysis Features. We implemented AdaBoost classifier; DecisionTreeClassifier; GaussianNB; KNeighborsClassifier; SGDClassifier; and SVC to predict whether a piece of particular news is fake or real. 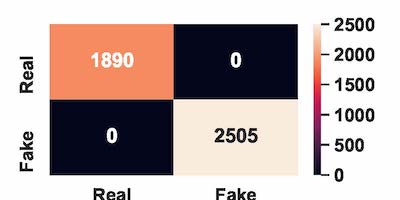